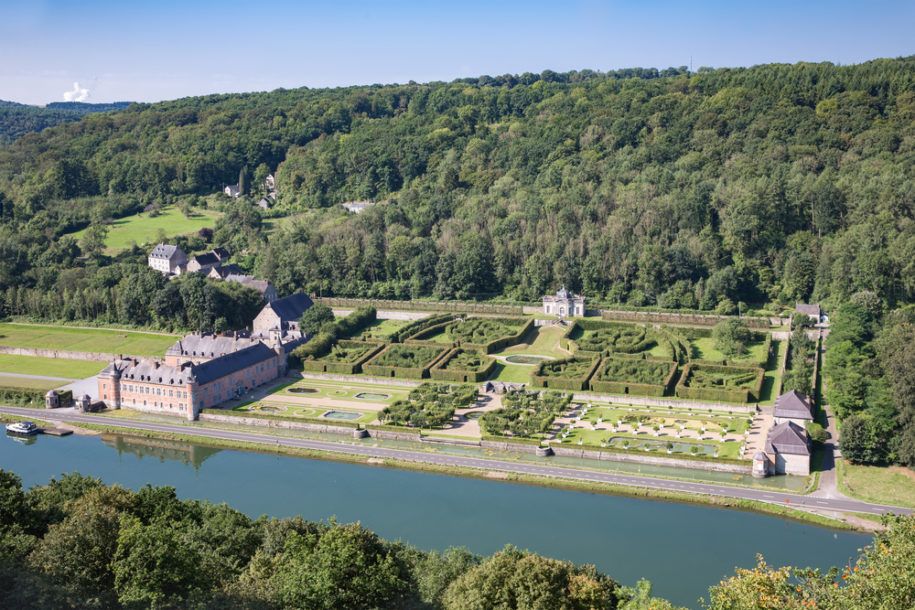 The sumptuous domain of the Château de Freÿr is located not far from Dinant , on the left bank of the edge from Meuse. A jewel classified as a major heritage of Wallonia, the castle and its gardens imbued with romanticism and peace plunge visitors into the heart of a site steeped in history.

The Freÿr estate: from the Middle Ages to the present day

If the first stones of this building were laid in the Middle Ages, it is its reconstruction during the Renaissance that remains visible. The fortified castle destroyed in 1554 and rebuilt in 1571 is characterized by interior furnishings and exterior fittings which remain intact today. Having received a visit from Louis XIV, proudly exhibiting a children’s carriage from the 18th century and awarded the first prize at the Paris Universal Exhibition in 1889, the Château de Freÿr saw the signatories of the Treaty of Freÿr which imposed the borders pass. between France and the principality of Liège. The first place in Belgium to drink coffee, this estate located in Hastière is also favored by tourists for its orange grove, some of which are over 300 years old.

This 18th century aristocratic residence is enhanced by a large vestibule which has kept its original character. Among the interior decorations, it is, among others, the murals by Frans Snyders that are worth seeing. Contemporary of Bruegel, its Flemish Baroque style decorates the castle of Freÿr with still lifes and hunting scenes. The Louis XV frescoes on the ceiling and the original furniture recall the comfortable intimacy enjoyed by 20 generations of aristocrats. Renaissance fireplace and furniture dating from the time of the Dukes of Beaufort-Spontin sit alongside the baroque-style woodwork of a chapel inviting peace and silence.

Called the Belgian Versailles, the gardens of the Château de Freÿr are inspired by Le Nôtre. Composed of a labyrinth of more than 6 kilometers, it is the bodies of water and the three hundred year old orange trees that make it unique. The orange grove adds, in fact, a delicate fragrance to the poetic journey made up of the fairy arbors of the site. Punctuated with statues and terracotta objects by Paul-Louis Cyfflé, the design of its paths and detours is inspired by a card game that the panorama from the Rocher de Freÿr allows you to appreciate.

Oriented south, the park offers a view of the Meuse about ten kilometers from domaine du Bonsoy . Facing north, it is the forests that serve as the backdrop to this unique expanse of vegetation. The delicate sounds of the pools and jets of water gently rock your walk in the footsteps of the most French of Belgian Mosan castles.

Finally, its Rococo pavilion which offers a breathtaking view of the valley still retains the traces of a railway line built by the Germans during the Second World War. The castle of Freÿr and the rock of the same name are not part of the same domain but complement each other! Grandiose works of man and nature are side by side to enhance an exceptional landscape.